Looking after the Honest Actors Podcast and Blog is a full-time job for me at the minute, particularly now that series 2 is up and running, but I still do my best to go to as much theatre as possible. It’s not something that’s ever been easy to achieve; as an actor, money and free time are frequently at a premium. 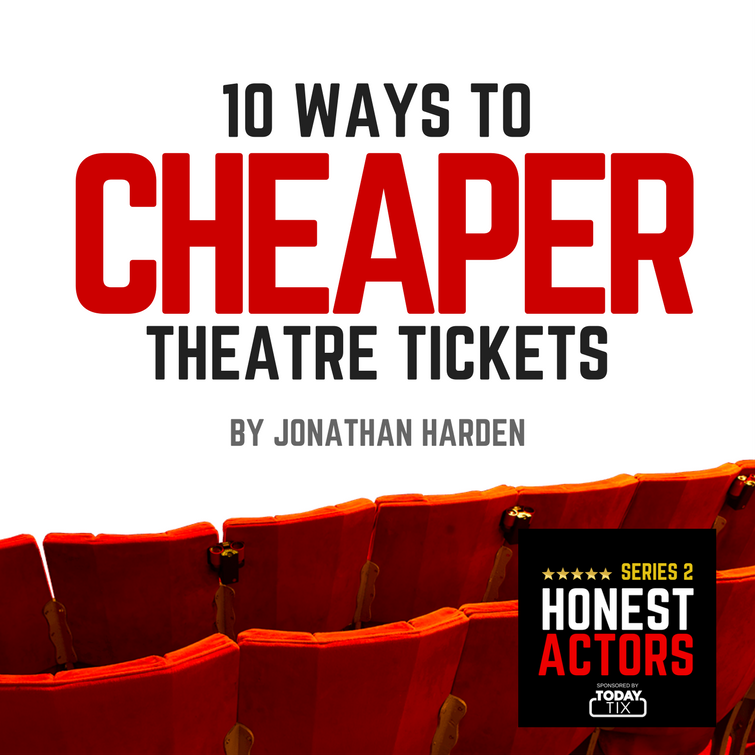 When I first met my agent, he advised me that there was no excuse for not going to the theatre. Can’t afford it? Turn up the interval and find an empty seat. While I didn’t did take him up of that nugget of money saving wisdom, I have made it my business to find the cheapest ways to see the best shows – from start to finish – ideally via some means other than taking a rush-hour tube to stand in line, in the rain with a load of tourists taking selfies under their umbrellas.

Here is the best of what I have learned. Use it wisely…

In order to make cheap tickets more accessible to those who cant dedicate a morning to queuing in the rain, the National Theatre have introduced the Friday Rush scheme, offering tickets to NT shows at late notice – even for productions that have sold out. Every Friday at 1pm an allocation of £20 tickets for performances on all three stage at the NT are released to buy online, for the following week’s performances. Cheeky.

While I’m talking about the National, it’s worth mentioning the theatre’s ongoing partnership with Travelex, enabling them to offer half the available seats for a range of new productions at just £15. Check it.

At 10am every Monday, £10 Front Row tickets go on sale for all shows at the Donmar. Even better, then can be purchased online, as well as over the phone (on 0844 871 7624) or in person at the Box Office. And if you’re able and willing to stand for the duration of a play (or at least until the interval – see above), standing tickets can be purchased in person on the day of every performance for just £7.50. If you’re down with the whole standing thing, then there’s even more for the like of you…

At least half of all seats for the first five previews of every single Old Vic production are now available for a tenner thanks to a deal with PWC. Tickets are released five weeks in advance though, so you need to be prepared. Just pray no work comes in between now and then…

There are 700 £5 standing tickets available for every single performance at Shakespeare’s Globe. Standing offers the best view of the stage, but it can be a long haul, particularly if it’s busy and there’s no space to move around, but there are no cheaper regular price tickets in London to my knowledge.

It’ll take a bit of organizing, but if you can get a large grouptogether before you book, you can get some cracking bulk discounts. At the Old Vic, a group booking can get you a 50% savings on tickets. It means you need to find nine friends that can go to the same performance, but with Whatsapp groups and facebook events, it has certainly never been easier.

Ok. Stick with me on this. Becoming a ‘friend’ of theatres like The Donmar and the National isn’t as mental as you might think. £15 a year gets you a ‘Advance Membership’ at the NT, entitling you to all book tickets – including our friend the Travelex £15 seats – ahead of the general public. You also get 50% off all NT Platform talks and discussions and receive season brochures and regular email updates. Bargain.

TodayTix is an innovative new app service that provides insider access to last-minute tickets, right from your phone, probably while youlre still sitting in your pyjamas. They charge a £3 booking fee for each ticket, but it beats the hell out of journeying into Leicester Square to queue and end up paying more than you wanted to justify the trip.The TodayTix app can be downloaded for iOS and Android devices.

Follow the theatres you want to go to, sign up to their mailing lists and keep an eye on your phone. It’s not unheard of for theatres like The Donmar to announce limited £5 pound tickets via a tweet, and the ATG have been known to do the same via email.

Here’s an idea: why not try some of the fringe theatres you probably only ever go to when your mates are in shows there? Some of the best theatre in London is happening at the spaces like the Finborough or the Southwark Playhouse. Tickets tend to be more affordable, but limited seating can mean they sell out fast.

Remember that as an actor, it’s all tax deductible. So if you’re a UK taxpayer, that means the equivalent of at least a 20% saving. Simples.

So there you go. In addition to these eight, I also recommend the obvious: buy in advance, go early in the run, and book any night but Friday and Saturday. But then you knew that, right?

Jonathan Harden hosts the Honest Actors podcast, which is now back for a second series. Find out more here, or click here to listen in iTunes…