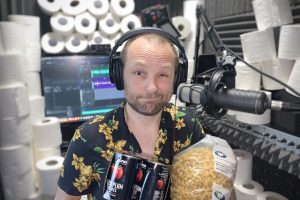 Nobody quite knows what’s going on at the moment, including those who really should, some things have emerged as definites: in the new normal, we all need to work out how to act – and more importantly earn – in isolation. To that end, and while it seems like ‘Acting’ as a career is temporarily on hiatus, I’m an ‘Irish Voiceover Artist’, plain and simple.

In between videos of sports reporters commentating on their dogs eating dinner, and not-so-simple-to-follow guides to making your own face mask from dried pasta, you will most likely have noticed the amount of your friends and peers who all-of-a-sudden appear to have fashioned ‘Home Studios’ from a mix of household items, expensive tech and a seemingly endless supply of blind optimism. It’s understandable, and shows resourcefulness on the part of those behind them, but it’s worth remembering that not all Home Studios are created equal. And no matter what 80s Hollywood told us, just because you build it, doesn’t mean they’ll come.

So, here are some pointers if you want to join the ranks of the Home Voiceover Revolution, and to live to tell the tale.

A Wardrobe Is Not A Studio

Everybody has to start somewhere. But a wardrobe? Seriously, I’ve even seen instagram posts from one dubbed ‘Studio Namia’. Great name, but not an ideal place to record professional quality audio. Contrary to popular belief, the smaller the space quite often the worse the sound. Honestly, nothing sounds ‘boxier’ than, well, a wooden box. Better to climb inside, go through the back, and ask Mr Tumnus if you can record over at his place. Before you journey into a parallel fantasy world, test other places around your house. A bedroom with some well positioned acoustic foam and a few other common-sense fixes (see below) might be just as good – and mean you won’t pass out from heat stroke and oxygen starvation. On that note…

The average audiobook lasts about ten hours. An experienced narrator can turn out a finished hour of audio after three hours in the studio. So the average ebook will take you four or five full days. Another reason why you don’t want to be sitting in your wardrobe. Audible’s audio standards are high, but not high enough to accidentally asphyxiate for. There are ways to get good audio without making yourself ill. Standing up is the new sitting down, so think about setting everything up on a deep shelf rather than on a desk.

Do your research before buying anything. Even acoustic foam can vary wildly in quality. To save some cash, buy a bit less of something a bit better, and make use of spare duvets as additional acoustic absorption. Even coast on the back of the door can help. Also consider a pair (or two) of bass traps rather than plain old panels. For all of the above, read up on positioning before plonking it where it looks nice. The main thing is to stop your world class VO from bouncing off the wall in front of you and back into the rear of the mic, so a portable ‘vocal booth’ behind the mic can go a long way.

Acoustic panels are only half the battle. They’ll mainly help absorb unwanted frequencies inside your bedroom, wardrobe, or kitchen cupboard (I’m not exaggerating). But what about unwanted noise pollution from beyond? Background noise either elsewhere in the room, flat, or even in the street outside won’t be stopped by some foam from Amazon. Consider a roll of draft excluder tape around the door, heavy curtains (or thick lining) on all the windows, and a polite notice outside the room asking people to go easy on the TikTok routines on the landing. Radio chat in particular can travel far, particularly as you can’t filter out other voices as easily as low traffic rumbles and other sounds that sit outside our frequency range of the human voice. And finally, turn off the washing machine, dishwasher and tumble drier, and give the dog a good chew toy with the squeaker removed.

Anyone Can Call Themselves A ‘Voiceover Artist’

Go on and you’ll be amazed at how delusional some people can be. ‘Voiceover Artists’ sitting on their beds and jabbering into their phones. Correction: ‘recording in their home studios’. There really is nothing to stop you opening another tab, creating an account and calling yourself a Remote Brain Surgeon. The same applies, to a lesser degree, on any of the major VO sites. Remember that you need to show yourself off as a professional, reliable business. Make sure to pull out all the stops to record a variety of high quality samples; narrating your favourite book, or an imaginary documentary. Show what you can do, and more importantly, what your kickass new studio is capable of.

Know What You Do Best

In an online marketplace, a client in Liverpool isn’t going to hire me to do my dodgy scouse. I’m an Irish Voice Over Artist, who sometimes does other things. No matter how good you think you are at accents, consider that your biggest strength as a voice actor is your own, natural voice. Trust me. Your main reel should demonstrate this.

Whatever you do, don’t over commit financially if you can’t afford the time and effort to see it through long-term. Some day soon, Aslan is coming back, Narnia will enjoy summer again, and your wardrobe door will close to through traffic for good.

Jonathan Harden is an Irish VO Artist and Voice Actor working from his wardrobe (not realty) and recently established www.irishvoiceovers.co.uk. He is best known as the creator of the Honest Actors Podcast, which returns with a limited edition lockdown-themed series very soon, featuring Denise Gough, Isaiah Johnson, Tom Goodman Hill and Joanna Scanlan. Honest Actors is available on iTunes, Acast, and wherever you get your podcasts.