Acushla-Tara Kupe signed with Q Management and subsequently filmed a new series for CBBC after networking at Surviving Actors 2017… Here is her story! 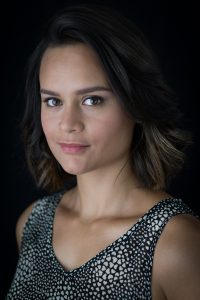 How did you meet Q Management?

I attended the Surviving Actors Expo at the beginning of the year and met Ziggie at a showreel clinic. Free 1-2-1 feedback clinics were being held throughout the day for headshots and showreels and when I signed up Ziggie was suggested as good fit. Little did I realize how good the fit would be!

Did you find your 121 at Surviving Actors with Ziggie useful?

Incredibly useful. Not only did she suggest changing/adding certain things, but she also let me know what was already working well and why. The clinic gave me great ideas on how to improve my reel and confidence in what I already had.

What is your top tip for making a good first impression?

Be active and start conversations while being authentic yet respectful. It’s important to be yourself, quirks and all, as this is not only memorable but it’s also beneficial for ones mental health. We play different characters for a living, you need some time in your own skin too. In saying this it’s imperative to be respectful and maintain a level of professionalism. Until you have established a relationship and know each other’s boundaries you don’t want to scare anyone off with a string of expletives or inappropriate jokes.

In addition to this, always have material to leave with them such as a CV, business card or what ever is appropriate for the situation. If you make a great first impression they might just want to get in touch afterwards.

You’ve recently filmed for a new CBBC series – that’s fantastic. How was the experience?

Absolutely amazing. We filmed in Manchester and Liverpool so it was a great way to see that part of the country. Everyone involved was fantastic to work with. It was the final episode of a 12 part series, but even after filming for about 7 weeks prior, the cast and crew were so kind and supportive. I can’t wait to see it when it comes out in Autumn!

Did you manage to make any good connections whilst on set?

I made a great connection with another actress based in London and we catch up regularly for self tapes, industry chats and sometimes just a good ol’ coffee. I also connected on social media with a few others that worked on the project and we keep each other up to date with news of the show but also personal triumphs too.

What did you enjoy most about your experience at Surviving Actors last year, and will we see you in 2018?

I really enjoyed the seminars. I attended a couple that were formatted similarly – lots of incredibly useful information followed by an opportunity to ask questions. I learned so much and left with a very long, but exciting, ‘To Do’ list. I also have to mention the atmosphere. Being at an event with like minded individuals who understand this crazy industry is both reassuring and encouraging. You’ll definitely see me in 2018.

Do you have any more projects coming up you’d like to tell us about?

I’m performing a new piece of writing called ‘Slow Ripening Fruit’ for Bechdel Theatre at The Bunker on the 22nd and 23rd of July, followed by ‘Romeo & Juliet’ at Cannizaro Park in Wimbledon from the 26th July. I’m also involved in a series of workshops taking place over the next year with the All Female Shakespeare Project headed by Barbara Houseman and Nastazja Somer, and finally in July/August 2018 I’ll be filming an incredible film called ‘Fractured’ which is a prequel to the book ‘Revolution Earth’!