Ever watch teenagers skateboard or snowboard? Or children in a sandbox pretending to be princesses and dragons…or anything from a fairytale. They’re having FUN and they’re playing! They’re having so much fun they become lost in a “zone”- a creative flow where everything is possible. You might read the book “Flow” by Mihály Csíkszentmihályi- “What makes a life worth living?” Noting that money cannot make us happy, he looks to those who find pleasure and lasting satisfaction in activities that bring about a state of “flow.”
Those in Flow are full of jubilant enthusiasm, courage, joy and fearlessness.

These are the six qualities of “flow”-

“The hallmark of flow is a feeling of spontaneous joy, even rapture while performing a task”

How does this relate to being an actor?

There’s something valuable to be learned from being in flow- “in the zone”. It frees you from fear, judgment and self-consciousness- all enemies to a successful audition or performance.

But, how do you keep the joyfulness alive with something you love to do when there’s a hundred reasons to give up, when the competition is outstanding, when you perceive that you’ve screwed up and failed? What do you do when you think you’re great (and you’re really very good) but the Network Executives/Producers in Primetime TV don’t hire you as expected? How do you continue when you lose? What do you do?

You develop your own style AND a system for winning! You focus on being in the zone while having a backup support. You work both angles- marketing and mindset.
Here are a few consistent things that all successful performers in “Flow”- whether in sports, the arts or business- have in their lives-

And the reward? If you hang in there long enough and perfect what you’re doing, focus on every interview and audition-that’s Flow…then, you’re already a Winner! The roles will come, the agents, managers, a successful team will be there for you and the opportunities to work with other winners will appear. Believe me, I know! 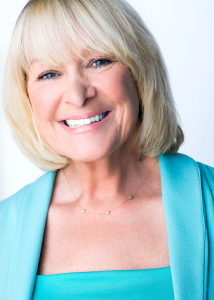 Having been selected by major NY and LA Agents, Casting Directors and Personal Managers as the “Foremost Marketing Coach for Actors”, Gwyn was a successful actor herself working in all medias. An Emmy Award nominated contract player she appeared in dozens of ABC and CBS daytime and primetime series including: All My Children, The Lucy Arnaz Show (CBS) and Woman of Valor (NBC- Emmy Award) as well as on and off Broadway and in classical Repertory theater productions- from Shakespeare, Moliere and Tennessee Williams to Noel Coward.

After studying drama at Carnegie-Mellon, Gwyn studied economics at Harvard and Political Science at Oxford University. She was a guest professor in the MFA drama program at Yale and University of California, Irvine. Gwyn founded Laight Street Films in Robert DeNiro’s Tribeca film community, creating Bloggers, a comedy pilot (HBO style). Her film, Fairytale recently shot in Paris and the south of France was well received at the Festival of Cannes. Currently she has a dramatic series, Enraptured optioned for TV production in Australia , a comedy sitcom, HOT AIR in development in NYC and a film, Heavenly Heist in pre-production in London.

Gwyn is the premier role model with winning strategies and first-hand knowledge of the TV, Film and Theater Industries which she willing shares to help new actors succeed.

For more information about her ONE-on-ONE coaching programs and to chat with Gwyn about your career- request a free 15 minute career session, contact her www.gwyngilliss.com/contact