Question: What are the best ‘other’ jobs for actors?

“Know what it is you’re going to do between acting jobs when you’re 50.” #ActorSunscreen

As part of my ‘other’ job (running the Honest Actors’ Podcast & Blog), this was one of the pieces of advice I shared recently at a Surviving Actors seminar. Easier said than done, was the feeling in the room, and I knew where they were coming from. The goods news, for them and you, is that I’ve been researching the best resting jobs for actors, and I’m not keeping them to myself…

Like most, I have filled the gaps between acting gigs (and plugged the gaping hole between acting earnings and London outgoings) by taking on paid employment of numerous kinds, with varying levels of financial compensation and, indeed, emotional toll. Predictably, the muggle CV covering my time in London includes multiple entries relating to jobs which had absolutely nothing whatsoever to do with being an actor.

It didn’t take me many disappointing wage slips to realise that I needed a longer-term plan: something that I could do when I wasn’t acting, and maybe even when I was, that would pay enough to cover my monthly outgoings and possibly allow me to use, practice and develop my performance skills.

It has taken me seven years to work out how to stay (largely) sane and (occasionally) pay the bills between acting jobs. It would have been so much easier had someone been able to provide an extensive list of the best options – those that were working well for other actors – and perhaps even a little first-hand insight into how I might get myself hired.

With exactly those aims, ‘My Other Job’ started going out weekly via The Stage at the beginning of February. In it, I’m talking to actors who have sideline gigs that not only enable them to keep their landlords at bay, but which also allow them to employ their existing skill set, or which offer them industry-relevant opportunities.

Like Surviving Actors, and the guest articles on the Honest Actors Blog, the ‘My Other Job’ interviews are about creating a community of support that benefits us all. ‘My Other Job’ is my attempt to get actors out of low-paid, inflexible, soul-destroying jobs.

It’s easier together than alone. Honestly. Check out the latest in the ‘My Other Job’ series here. 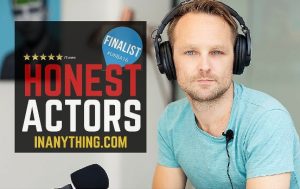 Jonathan Harden has worked in theatre, television and film, as well as in restaurants, bars and on building sites. Since 2015, he has been at the helm of The Honest Actors’ Podcast – the UK’s number one acting podcast – and its award-nominated blog.