Many look at stage combat as just learning how to safely punch and stab, but that’s really the easy part, adding intention, motivation, status, stakes, etc, while maintaining an awareness of safety (without showing it) is the tricky part.

Stage combat is a performance skill yet strangely so many actors forget to act, believing the choreography or the weapons will do it for them while they concentrate on not hurting each other. A fight scene is one of the most powerful acting opportunities a performer will ever get, so do it justice!

An actor in a fight needs to be in command of co-ordination, spatial awareness, physical storytelling, their character’s thoughts and much more. Only stage combat training can teach that in the context of a fight scene. In martial arts, a practitioner is not considered to be 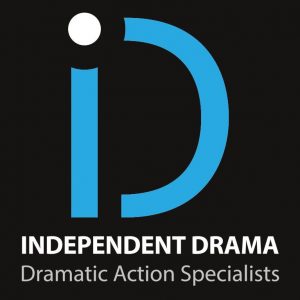 proficient until they have reached black belt and many say that their real learning began after that. One would assume that actors would train weekly in all their necessary skills; voice, accent, dance, but when it comes to stage combat it seems that doing a module at drama school, or a one day workshop, is enough. Much like singing or dance, stage combat is also a perishable skill. This is why there is a 3 year validity on qualifications. So, if you did a course back in 2012 (or before), technically you’re not actually qualified any more. However, I would argue that if you can maintain some regular training your skills should still be at a reasonable (if not better) standard.

I appreciate I may seem a little bias and there are other teachers that would argue their discipline is more important to an actor. I don’t deny that they are all important. An actor needs to be a master of his/her body, mind and voice; though I would point out that stage combat covers all three of those areas. Plus this is one of the only disciplines that will prevent you from seriously hurting yourself or another actor.

I think I’ve made my point, but what would I be if I didn’t offer a solution?

Independent Drama provides training for any schedule; from drop-in sessions to weekly and intensive courses AND at Surviving Actors we are offering discounts on all of them! PLUS a free drop-in session for anyone who visits the stand.