As I write, and perhaps as you read, the Olympics are on the telly in the background. A British athlete – Andrew Butchart – has just qualified for the final of the 5,000m (5k to me and you), with a time of 13:20. Yes, that’s just over 13 minutes to complete the equivalent of your local Parkrun… in temperatures well above 30 degrees. Not bad. And Andrew Butchart isn’t even doing it for a part. The good news is that he’s also not going to compete in this year’s Spotlight Challenge; that’s where you come in. Not fit? Can’t run? We need to talk…

“You have to stay twice as fit when you’re out of work.”

So said Billy Carter when I interviewed him for a yet-to-be-released episode of the Honest Actors’ Podcast. It’s great advice, and since then, I have reinterpreted it in a way that builds in the positive expectation that opportunities – and work – are on their way: “be ready when the call comes”.

Too often in the past, an audition has come through, I’ve read the breakdown and thought, “if only I had more time to get in shape”, “if only this had come through last summer when I was really fit” or just “there’s no way I’m going to get this”. Thankfully for all of us, it’s unlikely that Andrew Butchart and the rest of Team GB can act as well as they can run, jump, flip, tumble, pedal and paddle, but that’s no reason why we can’t at least aspire to be fitter actors. And as it’s unlikely anyone will run it in anything approaching the times we’re seeing in Rio, this year’s Spotlight 5k is a great place to start. For regular runners and those who want to push themselves even harder, there’s also a 10k race the same day.

Followers of the @HonestActors account on Twitter will be more familiar with the concept of #ActorSunscreen – tiny pieces of advice offered by the hoards of actors who went online to answer the question, “what career advice would you go back and give your younger self?” As you’d expect, many responses appear with 360 degree, full technicolour hindsight, and not all are universally transferable. “Stay in Manchester, don’t present kid’s TV” stands out alongside numerous other shining examples of regret-based advice, including: “Don’t do that ad for the rental company, it will be awful and you’ll have to let your mum watch it anyway”, “Burn the negatives of those headshots from 1986”, and “your boyfriend will tell you he understands your career. He doesn’t. And neither will the next one.”

There are, of course, many useful insights and after hundreds of responses, quite a few have emerged as what appear to be tried and tested nuggets of advice: work harder, drink less, don’t compare yourself to others, and – more than any other – “Be more Butchart”. Well, almost. “Exercise, for heavens sake”; “Stay in shape”; “Go to the gym more.” I understand why this advice is so popular, but I also get why for many it just isn’t possible to train like they’ve just landed a role in the next series of Game of Thrones, and for others, why they flat out don’t want to. Being active, however, is about more than having a body that’s Westeros-ready…

For me, exercise isn’t purely about looking better and being fitter, it’s about feeling better too. One of the things that training regularly has given me, in the absence of regular acting work, is an all-important daily routine. The sense of daily accomplishment too, seems to do my mood a lot of good. I get out of bed and eat a good breakfast, have goals outside of my acting career, and am doing something that will hopefully benefit me in the long term. Which, y’know, is important if I ever want to carry a Cordelia half my age.

A very good cause

It’s not all selfish though. The Spotlight Challenge is all in aid of Acting for Others. If you don’t know who they are, Acting for Others is made up of a number of individual theatrical charities who collectively offer financial and emotional assistance to those in the entertainment profession who have fallen on hard times, dispensing over two million pounds to hundreds of people within the profession every year. So you can hold your head high as you cross the finish line, assuming you still have the energy to do so…

Being part of a community, even if you’re not working

Lastly, exercise is great way to make new friends and reconnect with old ones. As an added bonus, the Spotlight Challenge is an event for Spotlight performers and members of the casting industry, so it’s not a terrible place to be photographed looking fit and healthy. On the flip side, there’s nothing like the threat of public humiliation to get you away from coverage of the Olympics and out running with purpose. I’m even told that running is the BEST Pokemon Go hack…

So, to join me and the rest of Team Honest Actors on Sunday 11th September, visit Spotlight Runners and enter your Spotlight View PIN for special reduced rate. Oh, and if you hurry, there’s a limited edition Honest Actors t-shirt for the first twenty to select @HonestActors from the teams list during the sign-up process.

Be ready when the call comes. Be more Butchart.

Jonathan Harden was born in Belfast. Since moving to London, he has worked extensively in television and film, as well as in restaurants, bars and on building sites. Since 2015, he has been at the helm of The Honest Actors’ Podcast – the UK’s #1 acting podcast – and it’s award-nominated blog. 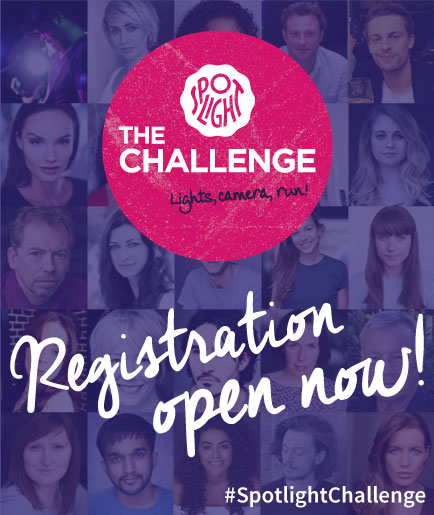