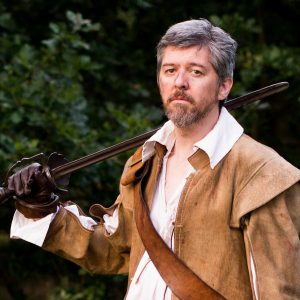 What is stage combat?

Think of stage combat as a broader term for staged combat. It has applications across theatre, film and motion capture. Although there are some significant differences between the different mediums the core skills are using a variety of theatrical techniques designed to create the illusion of physical violence whilst maintaining the safety of the performers and audience.

Why do I need it?

If you don’t plan to do any sort of physical violence in your acting career  then you don’t need to do it, but if you expect that you may end up having to do a slap, a fall or a fight at some point then yes you should consider learning the basics as minimum.

It’s often too late to learn skills on the job unless it’s a project which is both time and cash rich so if you’re interested in going for roles requiring fights then prior preparation can make a difficult job much easier and also more fun. The knowledge will also help your communication with a fight choreographer or director, enabling you to take direction more effectively and contribute where appropriate from a more knowledgeable position

There are many wider actor applications to stage combat training as it is high stakes acting at its most intense. All drama is conflict and in stage combat you learn how to build the tension in a scene dramatically to the point when words are no longer enough. Character analysis, communication, timing, intention and motivation are also core acting components of stage combat training.

Stage combat also helps actors get to know their bodies and how to use them as an effective instrument for telling a story. From finding a character’s physicality and showing the effects of pain and injury to being able to work physically with other performers stage combat training can help improve your general physical awareness. Posture, coordination, the ability to learn choreography quickly and general reflexes can all benefit.

How much do I need to do?

The higher your skill level the more marketable and versatile you will be and the more ambition projects you can attempt but you don’t need to do loads to benefit. Even a short drop-in session or two can give you a grasp of what may be involved in performing a fight and then you can decide if you want to do more and get better at it, making it part of your acting skill set.

If you are unsure whether a course is going to be too difficult for you don’t be afraid to ask the organiser. Most courses are designed around specific skill levels from beginner courses to those aimed specifically at advanced students.

The first 200 people to visit the Independent Drama stand will receive a free voucher for a Combat Lab which is a weekly drop in session open to all levels of students with different themes every week.

Details on Comabt Lab and other courses / training at www.independentdrama.com