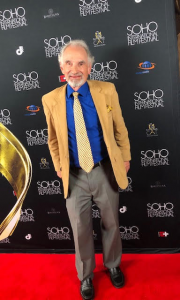 Our philosophy is simple: We feel the experience of continuing to learn should be joyous! Studio training and performance go hand in hand. At The Simon Studio, actors, writers, directors, artists, and thinkers freely mix in class.  This working process often allows scenes and monologues to develop organically into performances for public and industry audiences. Creating award winning projects for theater,TV/film and Radio. Renditions of classic plays by Tennessee Williams, Eugene O’Neill, Paddy Chayefsky, Anton Chekhov, Arthur Miller and of course Shakespeare! This has been our philosophy since 1978.

Check out the trailer and production photos here: https://www.loveinkilnerry.com

Mr. Simon next appears in Daniel Simon’s ‘Another Year Together’ at the Greenwich Film Festival and in the soon to be released ‘Cupid’s Cupcakes’.